Around 1,000 people have been evacuated from Ozon’s facility in Moscow Region 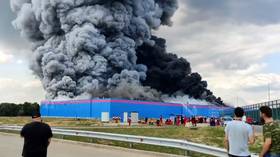 A huge fire has engulfed a warehouse of Russia’s leading e-commerce platform Ozon near Moscow, with hundreds of people forced to flee the site.

The blaze spans an area of 35,000 square meters, according to the emergency services. Around 1,000 people have been evacuated from the burning facility.

Videos from the scene circulating on social media have captured a massive pall of thick black smoke coming from the warehouse and rising high into the air. According to some reports, the roof of the building has collapsed because of the blaze.

Ozon initially said in a Telegram post that “all of the employees have been evacuated, nobody was hurt” as a result of the blaze, but medics later reportedly clarified that three people had ended up being injured.

Fire trucks and ambulances have been rushed to the scene, with Russia's Emergency Situations ministry also using aviation to tackle the blaze.

Petrovskoe village, which hosts the ill-fated warehouse, is located some 40 kilometers west of Moscow.

Ozon is one of the largest online retailers in the country, with some 25.6 million active clients last year. The company is sometimes referred to as ‘Russia’s Amazon.’