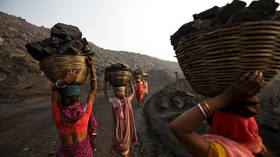 India’s imports of Russian coal increased dramatically in July with the South Asian nation switching to non-dollar payments to secure deals, Reuters reports. Moscow is trying to avoid dollar transactions amid US sanctions, describing the currency as ‘toxic.’

In July, Russia became India’s third-largest coal supplier with imports surging by more than a fifth to a record 2.06 million tons compared to the previous month.

In June, Indian buyers paid for at least 742,000 tons of Russian coal using currencies other than the US dollar, which is equal to 44% of the 1.7 million tons of Russian imports that month, the agency cites a summary of deals compiled by a trade source based in India using customs documents.

In recent weeks, Indian steelmakers and cement manufacturers have purchased Russian coal using the UAE dirham, the Hong Kong dollar, the Chinese yuan and the euro, customs documents reviewed by the agency show.

The Chinese yuan totaled 31% of the non-dollar payments for Russian coal last month, while the Hong Kong dollar accounted for 28%. The euro made up under a quarter and the Emirati dirham around one-sixth, according to data from the trade source.

The share of non-dollar transactions for Russian coal will increase as banks and other parties explore ways of cushioning themselves against any further tightening of sanctions, two traders told Reuters.