Evander Kane was cut by a skate blade in the NHL 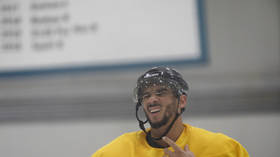 NHL ice hockey star Evander Kane was sent to hospital on Tuesday night after suffering a scary cut on his left wrist from a skate blade.

The incident occurred during a game between Kane's Edmonton Oilers and the Tampa Bay Lightning at the former's home rink, Rogers Place.

The Oilers ended up winning the contest 3-2.
Kane got in a tangle with Lightning player Philippe Myers inside the Oilers’ defensive zone early in the second period.

While Kane was on the ice, he was cut on the left wrist by the skate of Lightning player Pat Maroon, after which he grabbed the lacerated area and rushed to the bench.

Kane was taken to hospital after heading for the locker room. Later on Tuesday night, the Canadian franchise said that Kane was in stable condition and would undergo a procedure.

“The news that I've received so far – it’s very limited – is that he’s in a good spot,” said Edmonton’s coach Jay Woodcroft. “He’s getting well taken care of.”

“You cringe when you see that,” Lightning coach Jon Cooper remarked. “It was tough to see. Hopefully he’s going to be OK because, you know, hockey, you battle against each other. It’s a war, [but] we’re still a family.”

“I think you could feel the energy in the entire rink kind of just get sucked out. We're thinking about him. We’re hearing he’s doing OK, but that’s obviously initial,” he added.

Following a collision with a member of the opposition, Malarchuk’s throat was accidently slit by a skate which caused him to bleed profusely. 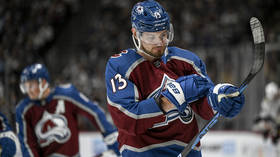 Medical staff were on hand to step in and save Malarchuk’s life. But the incident had a profound effect on the elite NHL championship by compelling it to later introduce protective gear for goaltenders that is still used to this day.

The Oilers are next in action on Thursday night when they take on the Carolina Hurricanes before a Saturday trip to the Florida Panthers. As of yet, it is unknown if and when Kane can return to action.