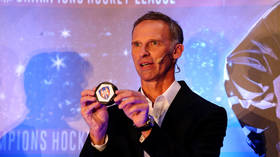 Dominik Hasek, the retired Czech ice hockey star regarded by many as among the finest goaltenders in the sport’s history, has reacted angrily after Russian players from two NHL teams were cleared to play in the NFL’s Global Series games which will take place in Prague on October 7 and 8.

The Czech government had initially opposed Russian players being permitted to take part in the league games and public practice sessions in Prague this week, which come as part of an NHL campaign to expand the league’s reach into developing markets.

The Czech Foreign Ministry had even written to the NHL to indicate that Russian players would not be welcome, noting that the country had imposed visa restrictions on Russians.

Nashville has one Russian player on its roster, Yakov Trenin, while Alexander Barabanov represents San Jose. A third Russian player, Evgeny Svechnikov, is on trial with the Sharks. 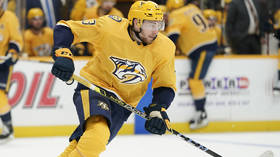 But according to NHL deputy commissioner Bill Daly, any such opposition to Russian-born NHL players has been dropped, and it is a move which will be welcomed by Sharks general manager Mike Grier.

“We’re a team, so if they say some guys can't go, either we all go or no one goes,” Grier said last week.

“It’s not the players' fault. They didn't do anything wrong. I don't think they should be punished for it. We stand with them, and we're all together as one in here.”

But the feeling isn’t quite shared by Hasek, the Olympic gold medalist who spent numerous seasons in the NHL for the Buffalo Sabres and the Detroit Red Wings, among others.

“Unfortunately [we have to let them in],” Hasek wrote on Twitter of the Russian players.

“According to EU laws (which in this case supersede ours), if they are coming from another EU country, we must let them in. That is, if we are not in immediate danger. We could only stop them at the airport when arriving from outside the EU.”

Hasek also claimed on Wednesday that the presence of the Russian players meant that the NHL had “revealed its face” and would therefore be supporting the Russian military campaign in Ukraine.

Hasek had previously petitioned the NHL to intervene in the matter, but it is understood that he received no formal response from the league.

The NHL stopped short of banning Russian players despite numerous other sporting federations across the globe imposing various restrictions on Russian athletes and sports teams since late February.

Two games between the Nashville Predators and the San Jose Sharks will take place in Prague’s O2 Arena on October 7 and 8. Two further games will be held in Finland in early November.