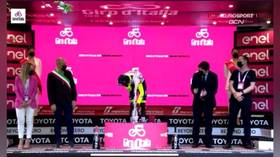 Biniam Girmay has been forced to pull out of the Giro d'Italia after suffering an injury when a prosecco cork hit him in the eye while celebrating a huge stage victory, as confirmed by his team Intermarche.

Eritrean Girmay became the first black African in history to achieve a win on any of cycling's three grand tours when he clinched the 10th stage of this year's Giro d'Italia between Pescara and Jesi.

After the cork hit him in the left eye, however, Girmay had to undergo tests which Intermarche team doctor Piet Daneels said showed he had suffered a "hemorrhage in the anterior chamber of the left eye."

"In consultation with the medical and sport staff, the decision has been made that Biniam Girmay will not take part any longer in this Giro d’Italia, which he is leaving with a stage victory, a second place and three other top five finishes," Intermarche remarked in a statement.

"The injury is moving in the right direction but in order not to aggravate it, it has been strongly advised to avoid intense activities," Intermarche continued.

Treated at a Jesi hospital before heading to a party held by Intermarche in the seaside town of Riccione, Girmay will have further tests on the eye and left the team hotel on Wednesday morning after he bid farewell to his teammates.

Girmay's injury occurred when he placed the bottle of prosecco on the floor then bent over it. As he undid the binding on the bottle, the cork flew off and hit him from close range.

Despite his withdrawal, Girmay has already made a name for himself in cycling and has established himself as one of the best sprinters in the sport.

Making history earlier this season when becoming the first African winner of a classic in the Ghent-Wevelgem in March, the 22-year-old has eight wins to his name since turning pro in 2020 and was ecstatic with his display in Italy where he proved too much for Dutch great Mathieu van der Poel.

"I watched the Giro as a kid on television and then went out riding with the dream of one day taking part," Girmay beamed prior to his accident on the podium.

"We write a little piece of history every day. I'm really happy about what I did today, I don't have the words to describe it," he added. 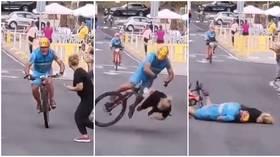 Congratulating Girmay on Twitter for "bossing" the race, fellow African Daryl Impey wrote: "What. A. Sprint."

Girmay has had to leave the Giro in second place in the race to wear the mauve jersey while just three points behind Arnaud Demare on 151.

With Van der Poel third and 58 points behind Girmay, Frenchman Demare is now the clear favorite to win the event overall.