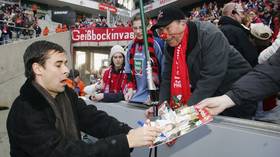 Former Greece international playmaker Vassilis Tsiartas has been handed a 10-month suspended prison sentence as well as a fine of €5,000 ($4,993) in a rare ruling by an Athens court after being found to have posted a ‘transphobic’ comment on social media in 2017, according to numerous reports originating in Greece.

The former Sevilla and AEK Athers playmaker, now 49, was part of his country’s victorious Euro 2004 squad in Portugal has vowed to appeal the ruling.

It is the first conviction under a broad anti-racism rule which was amended and introduced into Greek law, and which governs public incitement to violence or hatred on the basis of gender identity.

The ruling stems from a Facebook post submitted by Tsiartas in 2017 ahead of the signing into law of a redefinition of gender identity protocols. In the post, he wrote that he wished “the first sex changes [would be] carried out on the children of those who ratified this abomination.”

He added that Greek courts may as well “legitimize pedophiles, too, to complete the crimes.”

Tsiartas also wrote in a subsequent post that “God created Adam and Eve.”

The country’s Transgender Support Association (SYD) noted that the legal action taken against Tsiartas was “particularly important for the transgender community.”

SYD President Marina Galanou, who recently passed away, launched a lawsuit against Tsiartas based on his comments and stated that its mission was to combat all manner of racism, intolerance and violence against members of the LGBTQ community.

“With reference to yesterday’s publication of the conviction against me in the first court decision (against which I will appeal), I will post in detail from next week,” Tsiartas noted on social media, via translation.

The midfielder, who was capped 70 times, is widely considered to have been one of the finest Greek footballers of his generation. He claimed two assists during his country’s unlikely victory in the 2004 European Championships. He scored 12 goals during his international career, which spanned from 1994 to 2005.

After ending his playing career, Tsiartas became a football agent and also served as the temporary technical director of Greek giants AEK Athens in 2012.