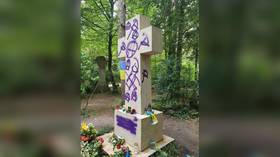 Caicyc published four photos showing the grave covered in purple graffiti on Facebook. “The tomb of Stepan Bandera in Munich, damaged by vandals. I decided to visit it for the first time, and there are police and this sight,” he wrote.

The images show the Soviet symbol of a hammer and sickle in spray paint on the grave, along with a number of anarchist emblems and swastikas. Bandera’s name was also heavily daubed in paint.

It’s not the first attack on the grave of the hardcore nationalist, who collaborated with the Nazis during World War II, and is considered a hero in present-day Ukraine. On March 7, then-Ambassador of Ukraine Andrey Melnik reported “a daring act of vandalism” and called on local police to find and punish the “disgusting scum” who had covered the monument with an unknown substance. 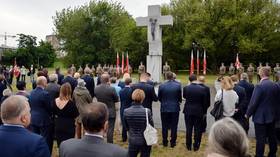 “What a shame that the demonization of S.Bandera is not only carried out by Moscow propaganda, but also by respected German historians,” he wrote on Twitter at the time.

During his almost eight-year tenure as his country’s top diplomat in Germany, Melnik, known for his deep sympathy for the controversial Ukrainian national hero, found himself at the center of several scandals. Last month, speaking to German podcaster Tilo Jung, Melnik repeatedly denied that Bandera was implicated in the mass murder of Jews and Poles during WWII on the territory of modern-day Ukraine. The ambassador’s statements prompted criticism from both Poland and Israel. The international outrage forced Ukraine’s Foreign Ministry to step in to explain that the remarks did not represent Kiev’s official stance.