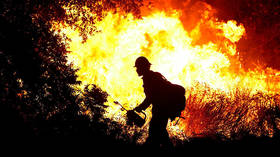 President Joe Biden’s administration has identified the culprit behind the two blazes that merged last month to become the state of New Mexico’s biggest wildfire on record: the government itself.

The two fires were both started accidentally by the US Forest Service (USFS), the agency said on Friday. Both fires were traced to controlled burns that were done by the USFS to prevent wildfires.

The agency, which previously revealed that the Hermits Peak Fire began with a controlled burn that went out of control on April 6, said the Calf Canyon Fire started when a burn pile that the USFS thought was fully extinguished in January reignited on April 19. 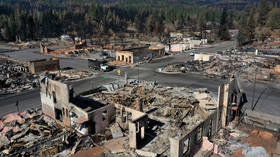 Three days later, the two fires merged and went on to scorch nearly 500 square miles of high-altitude forests and valleys in the Sangre de Cristo range. The combined inferno has destroyed at least 330 homes and displaced thousands of residents. It also wreaked environmental damage, wiping out wildlife habitats, denuding hills and making the region more prone to mudslides.

“The news today that the USFS also started the Calf Canyon fire adds to our sense of outrage,” US Representative Teresa Leger Fernandez (D-New Mexico) said on Friday. “The destruction these two fires caused is immeasurable and will be felt for generations.” She has introduced a bill to compensate property owners for their losses.

Those losses are continuing to pile up, as the fire is still raging. It was 48% contained as of Saturday morning, despite the efforts of nearly 3,000 people battling the fire. Firefighting costs have totaled $132 million and are rising at a rate of $5 million per day.

New Mexico Governor Michelle Lujan Grisham has called for the federal government to pay for all of the damages caused by the fire. “The pain and suffering of New Mexicans caused by these actions is unfathomable,” the governor said. She added that federal forest managers must re-examine their fire-management practices and “make sure they account for a rapidly changing climate.”

However, it was just such an effort that led to increased use of intentional burns. The Biden administration announced in January that it would spend $50 billion to expand wildfire-prevention efforts around “hot spots” made more vulnerable by climate change. The 10-year program includes a doubling of controlled burns to help thin out forests and eliminate tinder in at-risk areas.

The USFS last week suspended use of prescribed burns while the agency conducts a 90-day review of its practices. The Hermits Peak fire erupted when “unexpected erratic winds” sparked multiple spot fires to spring up outside the boundaries of the controlled burn.

“Our commitment is to manage the public lands entrusted to us by improving the forest’s resilience to the many stressors they are facing, including larger, hotter wildfires, historic levels of drought, rising temperatures, and insects and disease,” said Debbie Cress, a USFS supervisor in the Santa Fe National Forest.