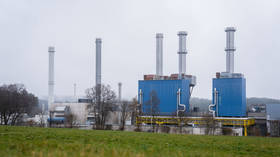 Germany’s energy regulator said on Wednesday that Russian gas flows at the Waidhaus border point through Ukraine declined by 25% on the previous day. The announcement comes as Kiev has suspended a third of Russian gas supplies to Europe.

The regulator’s comment echoed an earlier statement by Germany’s economy ministry that flows of Russian gas via the key transit point in Ukraine had dried up. According to the regulator, Berlin’s overall imports were stable as it was more than offset by higher volumes from Norway and the Netherlands.

The Ukrainian gas transmission system operator said on Tuesday, it had decided to suspend operations at the major transit point due to “interference by the occupying forces.” The border point accounts for a third of Russian exports to Europe via Ukraine. Russia’s energy major Gazprom said itsaw no reason for the disruption.

The move marked the biggest interruption to date. Despite the ongoing conflict, Russian gas supplies have continued to Europe, which is still heavily reliant on the country’s energy.