Annalena Baerbock was called a “warmonger” by protesters 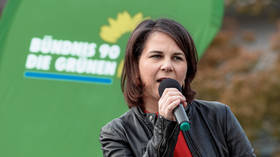 A group of protesters heckled German Foreign Minister Annalena Baerbock during a speech on Saturday, as she defended the government’s decision to send weapons to Ukraine. Many Western states have been increasingly supplying Kiev with arms after Russia attacked the neighboring country.

Around 1,000 people gathered to hear Baerbock speak in the northern German town of Ahrensburg. At the same time, roughly 150 attendees booed the minister and used whistles, sirens, and loudspeakers when she was on stage, police said. Some shouted “warmonger” and “liar” at Baerbock.

Police said the situation calmed down after officers intervened. One person was banned from the event.

Baerbock, who arrived in Ahrensburg to campaign for the Green Party in the regional elections, defended the decision to send weapons to Ukraine amid the Russian offensive. “We want to help the people of Ukraine so they can defend themselves against Putin’s war of aggression, which is illegal under international law,” she told the crowd, referring to the Russian president.

Baerbock also planned a campaign event in Lubeck, another city in northern Germany, on Saturday. But the speech was canceled due to security concerns after someone sprayed butyric acid on an open-air stage. The acid has an acrid smell, and can cause eye irritation and breathing problems. No one was injured in the incident.

“We will not be intimidated by such cowardly, underhanded attacks,” Emily Buning, the Greens’ political director, said. 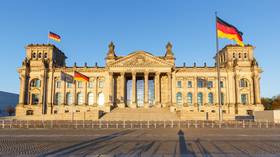 Chancellor Olaf Scholz was similarly heckled this month during a campaign speech in Essen, western Germany.

On Thursday, the nation’s parliament approved delivery of heavier weapons to Ukraine. Along with many other NATO members, Germany has been supplying Kiev with arms, including anti-armor and anti-aircraft missile systems, as well as armored vehicles.

Russia attacked Ukraine in late February, following Kiev’s failure to implement the terms of the Minsk agreements, first signed in 2014, and Moscow’s eventual recognition of the Donbass republics of Donetsk and Lugansk. The German and French brokered protocols were designed to give the breakaway regions special status within the Ukrainian state.