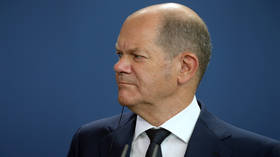 German Chancellor Olaf Scholz has denounced a remark made by Palestinian President Mahmoud Abbas at an earlier joint press conference. Scholz had come under fire for failing to challenge the comment on Tuesday, when Abbas accused Israel of perpetrating multiple “holocausts” against Palestinians.

“I am disgusted by the outrageous remarks made by Palestinian President Mahmoud #Abbas. For us Germans in particular, any relativization of the singularity of the Holocaust is intolerable and unacceptable,” Scholz tweeted in English on Wednesday.

At their joint press conference in Berlin on Tuesday, a journalist suggested that Abbas should apologize for the killing of 11 Israeli athletes by Palestinian terrorists during the 1972 Munich Olympics. The president replied: “From 1947 to the present day, Israel has committed 50 massacres in Palestinian villages and cities, in Deir Yassin, Tantura, Kafr Qasim and many others – 50 massacres, 50 holocausts.”

While cameras captured Scholz grimacing at this unconventional use of the word “holocaust,” he remained silent at the time.

However, later in the day, the chancellor addressed the ‘holocausts’ comment when speaking to Germany’s Bild media outlet before making his position known on Twitter the following day.

Nonetheless, the fact that he did not address the comment at the press conference caused a wave of criticism in the country. 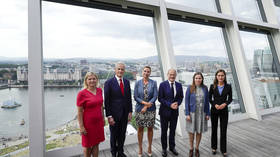 Christoph Heubner, the executive vice president of the International Auschwitz Committee (IAC), said he was astonished that “the German side… allowed [Abbas’] comments on the Holocaust to go unchallenged.”

Josef Schuster, the president of the Central Council of Jews in Germany, described Scholz’s silence during the press conference as “scandalous.”

His spokesperson Steffen Hebestreit said on Wednesday that the “chancellor regrets that he did not intervene… at the press conference yesterday afternoon.”

Abbas’ comment also came under fire in Israel, where Prime Minister Yair Lapid described the remark as “not only a moral disgrace but a monstrous lie.”

Also on Wednesday, the Palestinian president clarified that his comment was not intended to “deny the specificity of the Holocaust.”

The controversial remark came less than two weeks after the Israel Defense Forces carried out Operation Breaking Dawn in Gaza, targeting the leadership of the Islamic Jihad militant group. The Israeli army subjected the densely populated area to massive airstrikes.

According to Israel, a total of 49 Palestinians were killed as a result. The Israeli authorities claim to have killed several top Islamic Jihad commanders.