The price fell by 6.5% at the opening of trading on Thursday 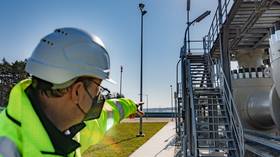 The price of August futures for natural gas at the TTF hub in the Netherlands dropped to $1,556 per 1,000 cubic meters at round 06:01 GMT, or €145 ($148) per megawatt-hour in household terms, according to data from London’s Intercontinental Exchange.

Gas supplies via the Nord Stream gas pipeline resumed at 04:00 GMT on July 21 and, according to the pipeline operator Nord Stream AG, pumping has already reached the pre-shutdown level of 40% capacity.

Gazprom suspended flow through the route for annual maintenance on July 11. Supply had already been reduced by 60% in June, after a turbine from the pipeline’s compressor station got stuck in Canada amid sanctions. Gazprom said it needed the part to restore full capacity and Ottawa allowed it to be returned to Germany earlier this month.

Gazprom said on Wednesday it was still awaiting documents from Siemens, the German company responsible for repairing the turbine, which would allow it to be delivered to Russia.