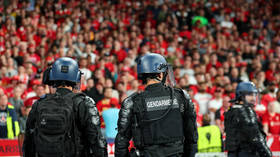 France's new sports minister Amelie Oudea-Castera says that Liverpool FC and its fans are to blame for the chaotic scenes outside the Stade de France which forced a delay to the kickoff of Saturday's Champions League final between Liverpool and Real Madrid.

French police were criticized for what was seen as a heavy-handed approach to crowd control as fans congregated outside the stadium, even deploying tear gas and pepper spray at some Liverpool supporters as they awaited entry.

They also came under fire for creating a bottleneck situation by restricting access to a pathway towards the ground. The ensuing chaos forced UEFA officials to delay the kickoff of European club football's showpiece fixture by 35 minutes.

However, according to Oudea-Castera the blame for the situation lies squarely at the feet of Liverpool and the club's supporters.

“The fact that the Real Madrid club has supervised the coming of its supporters to Paris to such an extent, by scheduling buses from the airport and organizing everything from start to finish – which contrasted sharply with what the Liverpool club did, letting its supporters out in the wild – made a huge difference,” she said to RTL.

The French government's stance has been resoundingly opposed by various supporters' groups, including Football Supporters Europe whose executive director Ronan Evain said that Oudea-Castera's comments are an attempt to deflect blame from the improper handling of the event by French officials and UEFA.

“There is a problem with how French authorities organized the game – and now they’re deflecting to Liverpool fans,” Evain said. “They want to avoid taking responsibility for what happened.

“There is a refusal [by the French government] to acknowledge that the Liverpool fans are the victims here. They tear gassed elderly people and kids. You owe them an apology.”

Evain also said that the fake tickets claim made by French officials had “no reflection of reality.”

Liverpool defender Andy Robertson also stated to the media that he gave a legitimate ticket to a friend who was denied entry amid claims that it was fake.

A meeting is schedule to take place on Monday between UEFA, French officials and the country's sporting ministry to determine if any learnings can be taken from the event, but per Oudea-Castera the decision has already been made as to who to blame.

“What happened, first of all, was this mass gathering of the British supporters of the Liverpool club, without tickets, or with fake tickets,” she added to RTL, also stating that there were no issues from Real Madrid supporters.

Paris police chief Didier Lallement also said that the use of tear gas was “unfortunately necessary” due to the scenes outside the ground, though he also added that he “deeply regrets that several attendees may have been inconvenienced.”

The growing scandal has become an embarrassment for French officials ahead of their hosting of the 2023 Rugby World Cup and the 2024 Olympic Games.