L’Oreal is set to resume sales of some of its most popular brands, the Trade Ministry says 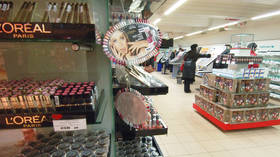 Cosmetics and perfume brands Lancome, Redken, Yves Saint Laurent, Giorgio Armani, and Kerastase will return to the Russian market and therefore will be excluded from the list of so-called parallel imports, Russia’s Trade Ministry reported on Monday.

“This became possible due to the readiness of these companies to resume deliveries of their products to Russia,” a ministry spokesperson said.

A host of international beauty brands, including giants like L’Oreal and Unilever halted business in Russia following the start of the conflict with Ukraine in late February.

In March, Moscow legalized so-called parallel imports, which allow deliveries of products without the permission of the trademark owners, to satisfy the demand for foreign goods on the Russian market.

The French beauty company LʼOreal, which owns the brands Lancome, Redken and Kerastase, as well as the lines of cosmetics and perfumes Yves Saint Laurent and Giorgio Armani has not commented on the issue yet.

In July, Trade Minister Denis Manturov revealed that Russia was negotiating a resumption of supplies with several major brands.