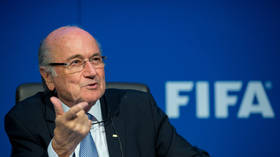 Former FIFA president Sepp Blatter has said the decision to hold the 2022 World Cup in Qatar was a “mistake” amid serious concerns about the Gulf nation’s ability to host the global festival of football later this month. He suggested that the decision was linked to the country agreeing an arms deal with France.

The event, which is due to kick off on November 20, has been dogged by accusations of human rights abuses involving migrant workers who helped to build the tournament’s infrastructure, as well as the country’s hardline stance on same-sex couples and the LGBTQ community.

Blatter was in charge of FIFA when Qatar won the vote to become the host nation in December 2010 and claims there was a prearranged agreement among the organization’s executive committee that the 2018 tournament would go to Russia and the 2022 World Cup to the United States.

However, it was Qatar which ultimately triumphed after the voting process concluded, and Blatter says he takes full responsibility for what he now sees as an error.

“Football and the World Cup are too big for this. It was a bad choice and I was responsible for it as FIFA president.”

Blatter has previously said the dramatic shift from the United States to Qatar came about after former UEFA president Michel Platini was convinced by French ex-president Nicolas Sarkozy to back the Qatari bid – a move which came shortly before Doha agreed to purchase $14.6 billion worth of fighter jets from France.

“A week before the 2010 FIFA congress, Michel Platini called me to say that our plan would not work. It turned out exactly like this: Thanks to Platini’s four votes, the World Cup went to Qatar instead of the United States. That is the truth,” Blatter explained.

“Of course it was also about money. Six months later, Qatar bought fighter jets from the French for $14.6 billion.”

Platini, though, has consistently denied claims that his vote was influenced by pressure from either Qatari officials or Sarkozy. The former French president has also stated that he made no attempt to influence Platini’s decision.

There have been allegations, including from the US Department of Justice, that some FIFA voting members received bribes from Qatar, with officials from Brazil, Paraguay and Argentina named in April 2020 as being suspected of voting improprieties.

“Ricardo Teixeira, Nicolas Leoz and co-conspirator #1 were offered and received bribe payments in exchange for their votes in favor of Qatar to host the 2022 World Cup,” an indictment from the US Justice Department read.

“Now that the World Cup is imminent, I’m glad that, with a few exceptions, no footballers are boycotting the World Cup,” Blatter added.

“For me it is clear: Qatar is a mistake. The choice was bad. What I’m wondering: Why is the new FIFA president [Gianni Infantino] living in Qatar? He can’t be the head of the local World Cup organization. That’s not his job. There are two organizing committees for this – a local one and one from FIFA.”