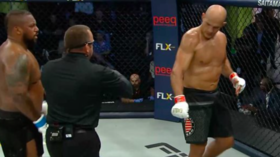 The once best heavyweight fighter in the world suffered what was his fifth consecutive loss at Eagle FC 46 in Miami, Florida – but this one was a little more unusual than the others on his recent losing streak, after he was defeated by third-round TKO after appearing to dislocate his own shoulder after connecting with a punch on his Cape Verdean opponent.

Dos Santos, who is without a win since 2019, was likely ahead on the scorecards against De Castro after dominating the opening exchanges with a steady stream of powerful strikes and thunderous leg kicks, but he came undone in the opening seconds of the third when he suffered the gruesome injury after connecting with a right hand which appeared to put his own shoulder out of its socket.

The gritty Brazilian attempted to remedy the situation by tugging at his arm in a bid to reconnect it with its socket, but it was to no avail and the fight was called off just over 30 seconds into the third round.

“His shoulder popped, I felt it pop,” De Castro said afterwards. “I could’ve taken advantage of it and charged forward, but I’m a man, I wanted the guy to go back to his family. I have a family, but I’m a f***ing fighter. If you guys disrespect me, I’m going to keep coming, and I can fight anyone.”

Khabib had previously stated that Dos Santos was in line to be the final opponent for Russian legend Fedor Emelianenko earlier this year after revealing that discussions had taken place for a cross-promotion between his fight league and Bellator, the American MMA organization for whom Russian icon Emelianenko is under contract.

However, it remains to be seen if Dos Santos' injury has scuppered those plans.

“My shoulder is back to place,” Dos Santos said shortly after the fight in an Instagram video. “I'm not feeling any pain.

“Before I go to bed I would like to share with you guys that I was feeling so happy. I was feeling very good during the fight, like I haven't felt in a long, long time.

“Things were working good for us before we had this injury.”