Raiola represented some of the biggest names in world football 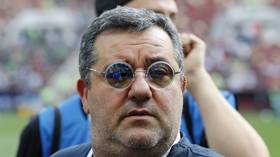 Mino Raiola, one of football's most prominent power brokers, has died at the age of 54, it has officially been confirmed.

The Italian football agent had been battling an unspecified illness since January and had been the subject of media reports in recent days which erroneously stated that he had passed away which were quickly disputed on his official Twitter account.

However, it was confirmed by the same social media page on Saturday that he has indeed passed away.

“In infinite sorrow we share the passing of the most caring and amazing football agent there ever was,” the message read.

“Mino fought until the end with the same strength he put on negotiation tables to defend our players. As usual, Mino made us proud and never realized it.

“Mino touched so many lives through his work and wrote a new chapter in the history of modern football. His presence will forever be missed.

“Mino’s mission of making football a better place for players will continue with the same passion. We thank everybody for the huge amount of support received during these difficult times and ask for respect to the privacy of family and friends in this moment of grief.”

Raiola represented several of the sport's biggest stars throughout his career as one of football's most powerful agents, negotiating some of the biggest transfers in the history of the game.

It was announced on his Twitter page that he had been hospitalized in January and had undergone surgery, but the exact nature of his illness was not revealed.

It was reported at the time that his condition wasn't considered serious and that he would return to work after a brief period of recuperation.

Raiola was born in Italy but emigrated to the Netherlands with his parents when he was infant, where he eventually began working in his family's pizzeria in Haarlem. He learned several languages while there and would later claim to have become a self-made millionaire while still a teenager.

He became associated with the youth team of HFC Haarlem in 1987 at the age of 18 and would eventually use his contacts in Dutch football to help broker the transfer of players like Bryan Roy, Wim Jonk and Dennis Bergkamp to various Italian clubs.

Raiola's stature began to grow exponentially within football and he would soon rise to prominence as one of the most influential and powerful agents in the game.

It was estimated by Forbes that Raiola's personal wealth was in excess of £60 million ($75 million).

Among the high-profile transfer he would negotiate were Paul Pogba's record-breaking move from Juventus to Manchester United, and the transfer of Dutch defender Matthijs de Ligt from Ajax to Juventus.

Perhaps Raiola's most prominent client today, Erling Haaland, is thought to be in discussions for a lucrative transfer from Borussia Dortmund to Manchester City – though it remains uncertain to what extent Raiola's passing might impact the potential move.

Paul Pogba is also expected to move from Manchester United upon the expiration of his contract this summer.