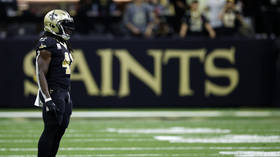 Footage has appeared online of NFL superstar Alvin Kamara appearing to repeatedly punch a man inside of a Las Vegas hotel earlier this year.

Five-time Pro Bowl running back Kamara, 27, who has played for the New Orleans Saints since he was drafted into the NFL in 2017, is alleged to have assaulted Darnell Green on February 5 at the Cromwell Hotel and Casino.

However, sources cited by TMZ Sports claim that Green initiated the confrontation which is understood to have occurred when Kamara and his entourage refused Green entry to an elevator outside the hotel's popular nightspot Drai's Nightclub.

A lawsuit filed by Green claims that Kamara pushed him away before launching into a violent assault.

The leaked security camera footage, which was obtained by TMZ Sports, shows Kamara – who can be seen wearing a light-colored shirt and in his signature dreadlocks, punching Green several times.

Green can be seen falling to the floor during the attack where members of Kamara’s entourage continue the assault, kicking the prone man while he is on the ground.

According to legal proceedings launched by Green, he suffered a litany of injuries in the assault including to his neck, back, head, shoulder, knees and face.

The lawsuit, in which Green is seeking a payment of $10 million, also claims that he suffered “a disfiguring facial fracture” to his right orbital bone.

Kamara was arrested in the days after the alleged assault on charges of felony battery resulting in substantial bodily harm and misdemeanor conspiracy to commit battery. He is due in court next week.

The New Orleans Saints star is considered to be one of the best running backs in the NFL. He scored a season high three touchdowns during his team's win against the Las Vegas Raiders last weekend.

The NFL has been forced to deal with a range of high profile assault cases involving its players in recent years. Another running back, Kareem Hunt, was hit with a multiple-game suspension stemming from a 2018 incident in which he was seen in hotel security camera footage kicking a female associate.

More recently, Cleveland Browns quarterback Deshaun Watson was suspended for 11 games following allegations that he had acted inappropriately in the company of more than 20 massage therapists.