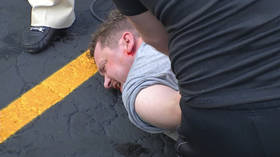 The man who was quickly released from jail after trying to stab New York gubernatorial candidate Lee Zeldin during a speech is now facing federal prosecution and a potentially long prison term.

The suspect, David Jakubonis, was arrested by federal authorities on Saturday and charged with assaulting a member of Congress using a dangerous weapon, according to an announcement by US Attorney Trini Ross in Rochester, New York. If convicted, he could be sentenced to as many as 10 years in prison.

The arrest came one day after Jakubonis was released from jail on a state assault charge without even being required to pay bail. He had been jailed for only about six hours before being let go under a 2020 state law that prohibits New York judges from imposing bail requirements on suspects charged with nonviolent crimes.

Apparently because Jakubonis didn’t succeed in stabbing Zeldin – he was pulled to the ground and apprehended after approaching the candidate on stage with a double-pronged weapon – he was charged with attempted assault, which is categorized as a nonviolent offense under New York law. 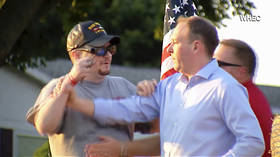 Zeldin’s supporters, such as state Republican Party Chairman Nick Langworthy, pointed to the case as an example of how public safety has been shrugged off in New York under Democratic Party leadership, including incumbent Governor Kathy Hochul. “Only in Kathy Hochul’s New York could a maniac violently attack a candidate for governor and then be released without bail,” Langworthy said.

The story might have ended there, except Zeldin also happens to be a sitting member of Congress, representing much of Long Island in the House of Representatives since 2015. While trying to stab a garden-variety politician would be a matter left exclusively to state law enforcement authorities, it’s a federal felony to assault a member of Congress.

Jakubonis, a 43-year-old US Army veteran, will be kept in federal custody until at least next Wednesday, when his bail hearing is scheduled to be held.