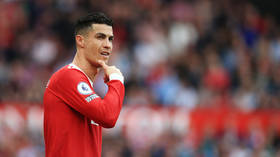 Cristiano Ronaldo has been overlooked for the Premier League's Player of the Season award despite bagging the most Player of the Month gongs this campaign.

The Manchester United legend returned to the club and the English top flight last summer from Juventus, and has had a fairly successful personal campaign that has yielded a return of 18 goals in 30 appearances.

Yet despite being named the Player of the Month on two occasions in 2021/2021, which is more than any of his rivals, Ronaldo has not made the shortlist to be recognized as the Player of the Season occupied by the likes of Liverpool's Mohamed Salah, Manchester City's Kevin De Bruyne and Tottenham Hotspur's Son Heung-min.

"This man scored 18 goals and gave three assists aged 37 and yet…," began one fan.

"Yeah, some deluded ones will [ask] where did the goals go," it was accepted, in relation to United's poor current sixth placed position. "[But] it is Player of the Season not Team of the Season."

"Robbed," claimed another CR7 enthusiast, as a separate party was more elaborate.

"Cristiano Ronaldo won the most Player of the Month awards, has won his team the most points in the league, but doesn't get nominated for Player of the Season. Make it make sense," she demanded.

"The monthly awards are voted for by fans online, that's why," it was also pointed out.

"Feeling for him. He doesn't have PR like [Lionel] Messi," lamented a tortured soul, though it must be noted that the now-Paris Saint Germain forward was also rejected for Ligue 1's Player of the Year accolade too.

Those less sympathetic to Ronaldo's plight asked questions such as: "He's been one of the worst players this season, why should he be voted?"

"He's the most overrated player of all time," another critic barked.

"In September: Salah deserved [it]. In April: [Gabriel] Jesus deserved [it]," a naysayer observed regarding Ronaldo's two Player of the Month award haul, with a hat trick against lowly Norwich being enough to pip five-goal star Jesus this time round deried.

Regardless, Ronaldo now has six Premier League Player of the Month awards across his career which puts him level with retired great Steven Gerrard and trailing only Sergio Aguero and Harry Kane, who have seven each on the all-time list.

Ronaldo celebrated the achievement on Twitter and said he was "as happy to win today as I was in my early days".

"The hunger for victory and achievements never fades away," he insisted.

With just one game of the Premier League season remaining for United, Ronaldo can try to finish with a 20-goal term to his name against Crystal Palace on May 22.