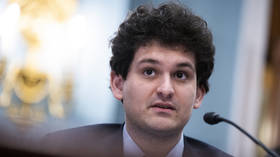 Samuel Bankman-Fried, the founder of failed cryptocurrency exchange FTX, allegedly laundered billions of dollars through Ukraine by setting up his company as the central clearinghouse for all crypto donations to Kiev’s war effort, according to the Gateway Pundit. Democratic politicians sending aid to Ukraine would see their money come back in the form of donations through FTX, the outlet claimed.

FTX launched crypto donation platform Aid for Ukraine in March, setting itself up as the central clearing house for all cryptocurrency donations to Kiev’s war effort. While the exchange was supposed to route those donations to the National Bank of Ukraine, the report suggests it funneled at least some of the money back to the US through political donations. Bankman-Fried was the second-largest donor to the Democratic Party for the midterms, pouring some $38 million into candidates’ coffers in 2022 alone.

The Ukrainian government had already received over $60 million in crypto donations as of March. FTX did not publish the amounts subsequently taken in, but other fundraising campaigns on Kiev’s behalf have been hugely successful – Star Wars actor Mark Hammill raised enough funds to buy 500 drones in a single month, for example.

Whatever funds the exchange had under management have presumably evaporated with the rest of its assets due to an alleged hack last week, and the exchange filed for bankruptcy on Friday. The resulting chaos has sent crypto markets spiraling.

In addition to bankrolling political campaigns, Bankman-Fried spent millions lobbying to shape cryptocurrency regulations. Democrats responsible for overseeing the Commodity Futures Trading Commission were particular targets for his largesse, and he is now under investigation by that same agency for moving $10 billion in client assets off FTX to his hedge fund Alameda Research.

While Bankman-Fried’s private jet has been tracked to Argentina, the disgraced billionaire insisted on Saturday that he was still in the Bahamas.