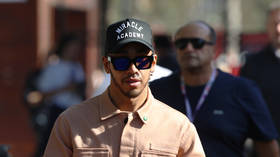 Formula 1 constructor McLaren have launched an investigation into a series of offensive messages which were allegedly sent to world champion driver Lewis Hamilton by a team employee.

The various messages are understood to have been sent from private Twitter and Facebook accounts which have since been deleted, according to a report by UK tabloid The Sun, and referenced Hamilton at various points throughout his career in motorsport.

“What a f***ing w*****" he truly is! Couldn't stand seeing someone do well!” one tweet read which was posted after Hamilton was forced to complete a 10-day isolation period after testing positive for Covid-19.

The unidentified person, who has reportedly been employed by McLaren, also referred to Hamilton as a “f***ing p****” after the seven-time world champion was referenced by the official Formula 1 twitter account.

Another offensive message after Hamilton was knighted in the United Kingdom read: “Oh f*** off! For having the fastest car on the grid. What a w*****.”

The person also appeared to revel in Hamilton's misfortune when he was disqualified from qualification from the Brazilian Grand Prix in November.

The series of message were brought to the attention of the McLaren team on Friday, who subsequently indicated that they intend to fully investigate the matter.

A statement issued by them read: “We consider these comments to be completely at odds with our values and culture at McLaren.

“We take the matter extremely seriously and are investigating it as a priority.”

Hamilton debuted for McLaren in Formula 1 in 2007 and won his first world title just a year later before moving to Mercedes in 2013 – the team at which he has won a further six world titles.

Hamilton requires one more world title to move in front of the legendary Michael Schumacher for the most championships in the history of the sport.