Ex-UK mercenary heads back to Ukraine after escaping death penalty

The fighter, however, “doesn’t expect to ever pick up a weapon again” 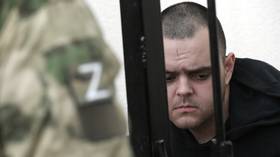 Aiden Aslin, a former British mercenary who fought for Ukraine during the ongoing conflict in the country, is heading back less than two months after being released from Russian captivity. Aslin says he will act as a YouTube “war correspondent” rather than rejoin the military.

“I promised my fiancée that I wouldn't go back to the military. I don’t expect to ever pick up a weapon again,” the British national told the Daily Mail in an interview published on Friday. His Ukrainian fiancée will stay behind in the UK as a refugee.

The ex-mercenary admitted he might already be too “recognizable” in Ukraine, but believes going back to the country is still “worth the risk.” Aslin said he was seeking to cover the lives of Ukrainian fighters and common folk alike, in order to bring their accounts to a wide audience in the West. 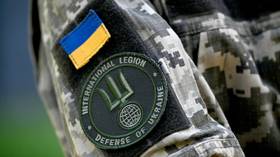 The ongoing conflict is set to drag on for a “few years” more, the ex-mercenary told the newspaper, insisting that “Ukraine has a real chance” of achieving its goals. At the same time, he suggested that only “political” issues in Russia could help bring the hostilities to an end.

Aslin was cast into the international media limelight back in April when he was captured by Russian troops amid the battle for Mariupol. The mercenary, along with several other foreigners, ended up sentenced to death in the Donetsk People’s Republic for various wartime crimes. However, he was ultimately released in September during a wider prisoner swap between Russia and Ukraine.

Moscow has repeatedly warned foreign nationals against going to Ukraine to fight for Kiev’s forces. Back in September, Russian Defense Minister Sergey Shoigu said that just over 1,000 foreigners remained active in the ranks of the Ukrainian military at the time, while more than 2,000 had been eliminated during the conflict.