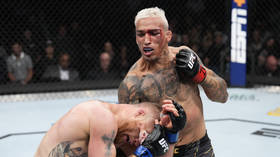 The perceived arrogance of UFC legend Khabib Nurmagomedov and his charge Islam Makhachev will "drown" and "kill" the Russians plus their agent Ali Abdelaziz, according to fired-up ex-lightweight champion Charles Oliveira.

Harshly stripped of the 155lbs title on the scales before UFC 274 for coming in just half a pound overweight, Oliveira booked himself another shot at the belt by finishing interim champion Justin Gaethje in front of his home crowd in Phoenix.

Though Oliveira wanted a 'Red Panty Night' against Conor McGregor next, president Dana White set up an intriguing bout against rising, 22-1 contender Makhachev in Abu Dhabi at UFC 280 on October 22.

With around 10 weeks to spare until fight night, tensions are already rising with Oliveira going on a passionate rant to Brazilian podcast MMA Hoje (MMA Today) aimed at Nurmagomedov and Makhachev.

"If they think they're going to come here kidding around, I'm going to tell you one thing: nobody will ever hit me more than life has ever hit me.

"I was a kid who was taken from a heart murmur, from rheumatism on the bones, when the doctor said I will never fight in my life, and not even do any sports, and I became a champion in the UFC.

"I'm going to your house, my friend, to fight against you [Makhachev] and make history and continue as the lightweight champion. Listen well to what I'm saying to you. Your arrogance will kill you and drown you," he again warned fighter and coach.

"You're talking a lot of sh*t, criticizing [me] and saying a lot of things. And I'm just here minding my own business and respecting [you] like I've always done with all of you.

"But pay attention – everything that you've said in the media is coming [your way]. So don't complain later. That's all I have to say," Oliveira finished.

Catching wind of the outburst, Abdelaziz took to Twitter to try and explain that there is nothing but admiration for the Brazilian and his camp on their behalf.

Tagging Oliveira, the Egyptian explained: "I just heard you said we are arrogant. We know you’re a great champion and [a] great human being, we know you’re very tough.

"This is not personal," Abdelaziz insisted. "October 22, it is going to be a great fight and we will see who is the champion.

"Big respect for you and your team," he signed off.

Oliveira's sermon marks the second time in recent weeks that he has lashed out at Nurmagomedov for what he judges to be a lack of respect coming his way from the last lightweight king before him who retired on 29-0 after beating Gaethje in late 2020.

Backstage at UFC 276, Oliveira advised Nurmagomedov to stop talking "crap" about him, though he did show respect for his legacy.

"He very much deserves to be in the Hall of Fame," Oliveira said. "I just think that at the time when he was champion the guy didn't talk that much crap.

"And now he does, he says a lot of things. He keeps saying I'll lose to this one and that one. So I think he should keep his mouth shut a bit more and stay a bit quieter rather than talking crap," Oliveira suggested.

"Like I've said he's a guy that deserves all the respect in the world," Oliveira went on, when told by the BT Sport interviewer that Nurmagomedov had recently told them he never meant to "diss" the Sao Paulo native. 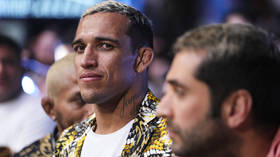 "[He's] a guy that spent his whole time fighting without saying anything. But he wants this fight so much that he's talking crap.

"I respect all of them. This fight will happen at one time or another, but I don't think it's the right moment. I don't think he [Makhachev] deserves the fight directly for the title and the champion's name is Charles Oliveira and I'm here," 'Do Bronx' stressed.

Weeks later, however, White made the fight between the pair and here we are – on the countdown to what promises to be an epic clash between a Dagestani wrestling expert and jiu-jistu and Muay Thai genius.