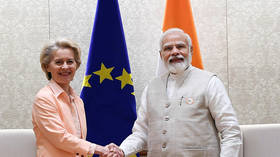 European Commission President Ursula von der Leyen has urged India to drop its trade in oil and gas with Russia, insisting that such business is not “sustainable.” She spoke while in the South Asian country for a multinational conference. 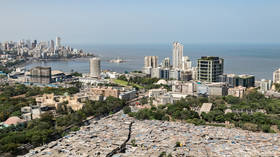 The fighting in Ukraine, which has not spilled over into any EU member state so far, constitutes “a stark reminder that our dependency on Russian fossil fuels is not sustainable,” von der Leyen insisted during a speech on Sunday at the International Solar Alliance. Russia has thus far shown willingness to continue sending energy to even “unfriendly countries,” although it insists that gas be paid for in rubles. However, several European nations and the US have called for a total energy embargo. A few holdouts, including Germany and Austria, have warned that fully weaning the continent from Russian energy by the end of the year is impossible.

“What happens in Ukraine will have consequences” for India and the surrounding region, von der Leyen said, continuing the anti-Russia theme in her keynote address at India's Raisina Dialogue conference on geopolitics and economics on Monday, and pointing to soaring prices of grain, energy and fertilizer as proof of her statement.

While boasting that Europe had “imposed effective sanctions,” von der Leyen nevertheless implied it was India’s duty to add to that “effectiveness,” insisting “for the Indo-Pacific region, it is as important as for Europe that borders are respected and the spheres of influence are rejected.”

Despite that remark, she did not hesitate to include India in Europe’s own sphere of influence, claiming that “India and the European Union share fundamental values and common interests,” such as a “free and open Indo-Pacific.”

The EU and India have agreed to launch a shared trade and technology council for “in-depth strategic engagement,” the second such pact signed by the continental alliance. The other agreement is with the US. A joint statement by the two parties suggested the council would focus on “the nexus of trade, trusted technology and security.”

India, which has thus far declined to throw its weight behind NATO’s economic warfare against Russia, has hosted senior officials from various countries this month, many of whom in some way have sought to sway New Delhi toward joining the sanctions regime. Just days before von der Leyen’s arrival, UK PM Boris Johnson visited the country to “deepen the long-term partnership” between Britain and its former colony, with an eye toward shifting Indian policy on Russia. More European dignitaries are expected to join von der Leyen at the Raisina Dialogue conference.