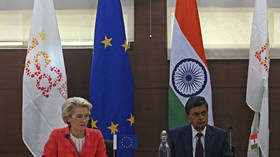 Von der Leyen is also expected to discuss the resumption of talks on a free trade agreement between the bloc and India, according to Reuters. The main objective of the European Commission chief is to woo India away from its long-standing military and economic partner, Russia, the report claims.

“There are a whole host of Western leaders reaching out to India right now to see what alternatives we can provide,” the unnamed EU official told Reuters. “The key is that we want to bring forward this relationship, work on technology together and bring India into our camp, that’s the main message of our visit.”

India and the EU have been holding talks on establishing a free trade agreement off and on for years. The negotiations were frozen in 2013, when they hit a snag over tariff reduction and patent protection issues, and restarted in 2021. 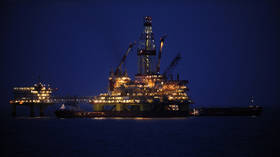 Last week, UK Prime Minister Boris Johnson paid a visit to his Indian counterpart as well. He offered to boost defense cooperation between the two countries to Modi, with a potential free trade deal also high on the two leaders’ agendas.

Johnson, among other things, pledged that Britain would support India in creating its own fighter jets. He also promised to issue an India-specific open general export license to reduce delivery times for defense items destined for India.

The UK prime minister acknowledged, however, that it is unlikely India would turn its back on Russia in the foreseeable future.

While calling for a peaceful resolution to the military conflict in Ukraine, India has stopped short of directly condemning Russia’s actions or imposing sanctions.