The European Union will fork out $9.5 billion to keep Ukraine afloat, as Washington has instructed 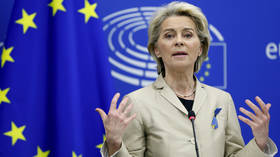 European Commission President Ursula von der Leyen on Wednesday proposed an aid package of €9 billion ($9.5 billion) to keep Ukraine’s government running, and added that the EU would lead reconstruction efforts in Ukraine after hostilities cease. Her announcement came a day after the US called on Europe to open its coffers for Kiev.

Money for the aid package would be borrowed by the Commission in global financial markets and would be repayable by Kiev. As per the EU’s rules on macro-financial assistance, the Ukrainian government would be free to use the cash as it sees fit.

Ukrainian President Volodymyr Zelensky has claimed that Ukraine needs around $7 billion per month to pay its soldiers, civilians and pensioners, and to keep essential services running. The proposed EU package will therefore keep Ukraine functioning for just over a month. 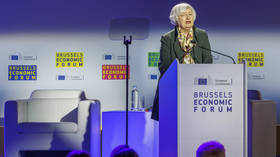 Hours before von der Leyen’s announcement, US Treasury Secretary Janet Yellen told the Brussels Economic Forum that “the bilateral and multilateral support announced so far will not be sufficient to address Ukraine’s needs, even in the short term.”

“I sincerely ask all our partners to join us in increasing their financial support to Ukraine,” she continued, adding that aside from keeping the country afloat in the short term, “massive support” would be needed to rebuild Ukraine once the fighting ends.

Von der Leyen said on Wednesday that the EU will lead this reconstruction effort, but would not be the sole contributor.

"That is why we propose a reconstruction platform as part of this plan jointly led by Ukraine and the Commission and bringing together EU Member States, other bilateral or international donors, international financial institutions, and other like-minded partners," she said.

While von der Leyen’s aid package is in line with what Yellen requested, it must still be approved by both the European Parliament and European Council. However, none of the Commission’s aid packages to Ukraine thus far – which include four consecutive €500 million ($520 million) packages of military aid and €1.2 billion ($1.26 billion) worth of emergency loans – have faced any resistance from either body.

Russian President Vladimir Putin has accused EU leaders of acting on behalf of their “American overlord” with regard to Ukraine, and committing economic “suicide” by cutting themselves off from Russian energy resources amid inflation and record high fuel costs.