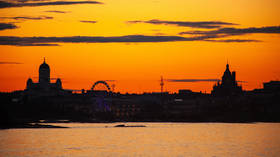 Finland has continued importing Russian LNG after being cut off by Moscow from its natural gas supply over the refusal to pay in rubles, Finnish Gasum spokeswoman Olga Vaisanen said on Wednesday.

She said that the company has two different contracts to receive Russian gas. One of those entails pipeline supplies through Imatra and the other liquefied natural gas (LNG) transported by tankers.

“Pipeline gas supplies have stopped. The purchase of liquefied natural gas is not subject to sanctions or ruble requirements,” Vaisanen said.

The agreement on the supply of Russian LNG is long-term, and Gasum will continue purchases, she said. Finland currently receives “several LNG supplies per month.”

Finland also receives Russian gas through an interconnector with Estonia. According to the Latvian operator Conexus, daily deliveries average about 3 million cubic meters, which corresponds to the volumes that Finland received directly from Russia prior to having pipeline supplies cut off.

Russia’s Gazprom stopped gas supplies to Finland on May 21 due to the country's refusal to pay in rubles. The new payment method was introduced by Moscow on April 1 and applies only to countries that imposed economic sanctions against Russia.