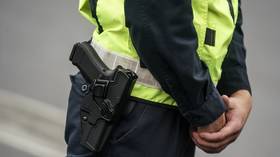 Latvian police will stop protecting Russia’s consulate buildings in the cities of Daugavpils and Liepaja, the country’s news agency LETA reported on Saturday.

The change must be confirmed by the government, but the Foreign Ministry has reportedly informed police that they are no longer required to safeguard the consulates.

In April, Latvia demanded that Moscow close both offices and that the personnel posted there leave the country by April 30. The country’s Foreign Ministry said the decision was made “in solidarity with Ukraine.”

Protests have been held outside the Russian missions in Latvia in response to Moscow’s military operation in Ukraine, which was launched in late February. In April, a protester threw red paint on the Russian Embassy building in Riga.

Last week, Latvia stopped accepting visa applications from Russians, with the exception of those applying for entry “to attend the funeral of a close relative.” According to Latvian media, the State Security Service (VDD) accused Moscow of waging “an increasingly aggressive foreign policy against Western countries,” and said that Latvian authorities were boosting security measures.

In April, Russia responded to the expulsion of diplomats from the Baltic states by demanding that Latvia close its consulates in St. Petersburg and Pskov. The decision was made “in accordance with the principle of reciprocity,” the Russian Foreign Ministry said at the time.