The surge is triggered by higher electricity prices, along with price hikes for food and non-alcoholic beverages 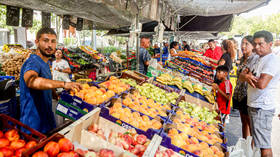 Annual inflation in Spain rose to 10.8% in July, hitting the highest level in 38 years, data published by the Spanish Statistical Institute (INE) on Friday shows.

Despite significant drops in gasoline prices, soaring electricity and food costs led to a 0.6% rise in the inflation rate last month. The latest data confirms the INE’s preliminary outlook from late July.

In July, prices for energy products in the country skyrocketed 41% year-over-year, while some basic food products were up by over 20%. Spaniards have reportedly seen a significant surge in the price of eggs, milk, and other dairy products, as well as meat, bread, and cereals.

The inflation rate in Spain has increased for three consecutive months, after a drop of 1.5% in April. It surpassed the double-digit mark in June.

Madrid has taken several steps to combat rising energy prices, including the lowering of value-added tax on energy bills, and reaching an agreement with the EU that allows Spain to limit the effects of gas prices on the cost of electricity. The government began financing a 20-cent-per-liter reduction in the cost of gasoline as well.

However, food prices are expected to increase further in the coming months, as this summer’s severe drought in Europe may significantly affect farm produce, including olives, fruit, and vegetables.