Morgan Stanley expects the bloc’s GDP to drop through 2023 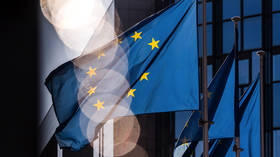 Morgan Stanley has slashed its forecast for the EU’s GDP in 2022 and 2023, saying a slowdown in the bloc’s economic growth is imminent amid geopolitical pressure.

In a note published on Monday, the financial institution said it had lowered its 2022 euro area GDP growth forecast to 2.7% from the previous 3%. It has also cut the growth forecast for the European economy in 2023 by a full percentage point, from 2.3% to 1.3%.

“Despite the resilience in economic activity shown so far against geopolitical headwinds, we think more material impacts will show in the second half of the year, through various channels of transmission,” the note from the US-based investment bank said.

Morgan Stanley explained that the drop in economic growth will stem from the prospect of a significant reduction of energy flows from Russia, which is crucial for many European industries and businesses. The EU is currently considering an embargo on Russian crude oil and natural gas as an expansion of sanctions against Moscow in response to the ongoing military operation in Ukraine. Experts say that ditching Russian energy imports would propel prices throughout the block even higher than they are now, plunging the EU into recession.

On the other hand, according to the organization, the European economy is also likely to be affected by the economic slowdown in China, brought about by Beijing’s strict measures to contain a recent surge in Covid-19 infections in the country.