Latvia is being supplied through an intermediary, an official was cited as saying 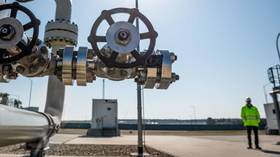 Latvia has continued to buy Russian natural gas even after refusing to adhere to Moscow’s ruble payment demand, the head of Latvian gas company Latvijas Gaze has told the news outlet Delfi.

“Latvijas Gaze is buying gas now, but we don't buy gas from Gazprom because we can't pay Gazprom. We have another supplier,” Aigars Kalvitis, chairman of the gas company, was cited as saying. The official did not, however, disclose the name of the intermediary that is supplying the company with Russian natural gas.

In April, Latvia, along with neighboring Baltic states Estonia and Lithuania, rejected Russia’s demand for natural gas payments in rubles and stopped importing gas from Gazprom as part of an effort to cut energy dependence on Moscow amid Western sanctions. In mid-June, Latvian Prime Minister Krisjanis Karins vowed not to resume imports of Russian gas, and earlier this month the Latvian parliament approved amendments to its energy law that will ban Russian natural gas imports starting January 1, 2023.

Last year, Russia was Latvia’s main gas supplier, accounting for 90% of the country’s total imports of the fuel.