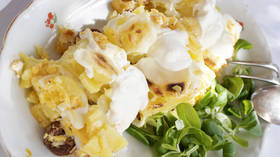 The cap was announced after data showed food prices soared by 40% in October, with overall annual inflation exceeding 21%, according to official figures.

Potatoes and eggs are ingredients for potato and egg casserole, a traditional meal described by newspaper Hungary Today as “one of the most Hungarian dishes.” It is second only to goulash, the ultimate Hungarian dish, according to the website Taste Hungary.

The government put a price cap on six other food products, including milk and flour, in February to try and protect households from soaring costs.

Inflation in the Eurozone hit 10.7% in October. It is the first monthly inflation reading above 10% since the bloc’s formation. Prices for food, alcohol, and tobacco across the euro area are believed to have risen by 13.1% year-on-year. The surge was fueled by energy prices which Eurostat estimated to be 41.9% higher than in the same month last year.