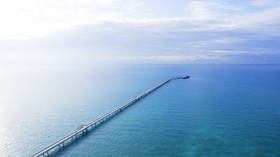 The European Commission (EC) is studying the possibility of building an offshore gas pipeline that would link the Iberian Peninsula with Italy, the newspaper El País reported on Wednesday.

Connecting Italy to Spain would be significant, given that Spain has the largest capacity for regasifying liquefied natural gas (LNG) in the European Union. There are six operating regasification plants in Spain, according to the report. However, the country's pipeline connection with most of the rest of the EU is limited because of the high Pyrenees mountains, which form the border between Spain and France.

According to El País, the 700-kilometer pipeline between Barcelona in Spain and Livorno in Italy appears on one of the maps in the REPowerEU plan. Constructing it is expected to take one to two years and will require an investment of between €2.5 and €3 billion ($3.2 billion). The pipeline could supply gas to both Italy and the countries of central and northern Europe, it said.

Spanish Prime Minister Pedro Sanchez said in an interview with CNBC on Monday that Spain and southern Europe as a whole could help reduce the EU’s energy dependence on Russia. He noted that Spain accounts for 37% of the EU’s regasification capacity.

Russia has been a major supplier of gas to European states. EC data shows the European Union receives 40% of its gas, 27% of oil and 46% of coal from Russia. EU members agreed to cut out Russian coal but have failed to reach a consensus on proposals to ban Russian oil imports. The difficult-to-replace pipeline gas also remains a stumbling block as the union discusses its sixth package of sanctions.