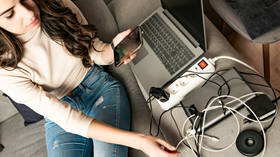 Tech giant Apple will be forced to redesign its iPhone to comply with new EU standards passed by the European Parliament on Tuesday. The regulation, approved by a sizable majority of MPs, will require all electronics sold in the bloc’s 27 countries to use standard USB-C charging ports.

The rule comes into force in autumn 2024 for phones and 12 other categories of devices and laptops in 2026.

Apple’s popular smartphones currently use the company’s proprietary Lightning connector, though newer models can also charge wirelessly using special charging mats. While the company has been rumored for years to be mulling a fully 'portless' device which would use the mats exclusively, it is reportedly working on a USB-C compatible model first.

Europeans will not have to throw away their old phones and laptops — only new devices will be required to carry the universal port, according to EU MP Alex Agius Saliba, the measure’s primary cheerleader in Parliament. He explained that banning old styles of charger would have disproportionately inconvenienced consumers while causing unnecessary environmental harms. 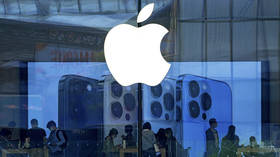 At the same time, Saliba admitted the change was expected to nudge consumers into eventually buying new compatible electronics. Accordingly, shares in smartphone and semiconductor manufacturers rose on Tuesday.

Given the large number of European electronics consumers, the adoption of the USB-C standard is likely to spread worldwide, even though Apple and Google are US-based companies, Samsung is South Korean, and Huawei is Chinese.

Brussels has urged tech companies to agree on a single type of charging port for over a decade, to no avail – studying the phenomenon in 2019, the European Commission found that half of cell phone chargers sold the previous year used USB micro-B chargers (the predecessor of the USB-C), while 29% used USB-C and 21% used the Lightning connector.

Apple had previously complained that passing such a law would fill up landfills with aging incompatible smartphones. The tech behemoth also suggested the move would hurt innovation, presumably referring to its development of fully wireless charging technology.

However, industry chief Thierry Breton argued when a preliminary version of the rule was adopted in June that the move would actually encourage the development of wireless charging and other innovations, insisting that inventors would have an easier time designing for a single hardware platform instead of making their tech work across an increasingly fragmented market.

Parliament has asked the European Commission to evaluate the regulation potential for wireless charging, but one official told Reuters that no decision has been made on that front as the technology remains experimental.