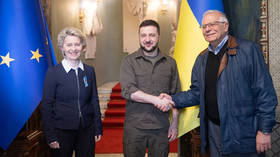 Josep Borrell, the EU High Representative for Foreign Affairs, will urge member states to set aside more funds to cover enhanced military assistance for Ukraine. The top diplomat shared his plan with reporters at an informal EU summit in Prague on Friday.

“I will ask the leaders to support the proposal for a new tranche for European Peace Facility to continue providing military support to Ukraine, also to the training mission,” Borrell said, as quoted by Reuters.

Earlier this week Borrell expressed hope that at the next Foreign Affairs Council gathering on October 17, the EU will be able to “formally launch” its training mission for Ukrainian armed forces. Writing in his blog, the diplomat also claimed that the EU would “reinforce” its strategy of supporting Ukraine – “militarily, financially and politically.”

The European Peace Facility (EPF) that Borell referred to, is a mechanism created last year to enhance the EU’s ability to act as a global security provider. The EPF reimburses governments for military equipment supplied to Kiev, “including items designed to deliver lethal force for defensive purposes.”

The latest round of funding for Ukraine under the EPF, worth €500 million, was agreed by the European Council in July. With this package, the total EU contribution for the country within this framework amounts to €2.5 billion.

The EPF has a ceiling of about €6 billion and is supposed to support not only Ukraine but also other countries.

As EU nations face an energy and cost-of-living crisis, exacerbated by anti-Russia sanctions and a reduction in Russian energy supplies, Borrell earlier urged people in the bloc to combat “the temptation to abandon Ukraine.” 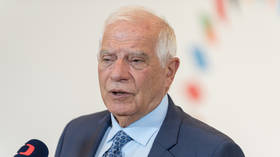 Responding earlier this week to the EU’s plan of creating a training mission for Kiev's armed forces, Russian Foreign Ministry spokeswoman Maria Zakharova said that such a move would only “fix the EU in the status of a participant in the conflict.”

In April, she accused the bloc of turning into “NATO’s economic relations department.” This followed Borrell’s tweet that “This war (in Ukraine) must be won on the battlefield.”

Moscow has consistently warned Western countries against providing military support to Kiev. It argues that such assistance would only prolong the conflict and will lead to unnecessary casualties.

Ukraine, in turn, has repeatedly claimed that the EU is too slow in its weapons supplies and that it doesn’t always provide what Kiev had requested.