Erdogan to brief Putin on talks with Zelensky 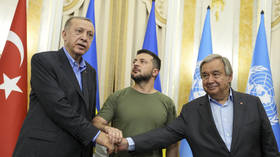 Following his trilateral talks with Vladimir Zelensky and UN Secretary General Antonio Guterres in Lviv on Thursday, Turkish President Recep Tayyip Erdogan reiterated that Ankara is seeking to act as a mediator to help bring an end to the conflict in Ukraine by means of diplomacy as soon as possible.

“What matters is to find the shortest and fairest way to the negotiating table,” Erdogan said in the western Ukrainian city, as cited by Anadolu news agency. “We’re ready to act as a facilitator or mediator towards the goal of reviving negotiations upon the parameters that took form in Istanbul.”

According to Erdogan, the world is already feeling the “positive effects” of a grain exports deal signed in Istanbul on July 22 and during Thursday’s talks the participants “evaluated the possibilities of transforming the positive atmosphere created by the Istanbul agreement into permanent peace.” 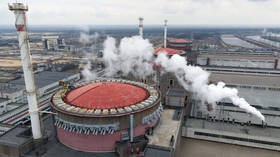 Erdogan said he would discuss the details of his talks with Zelensky and Guterres with Russian President Vladimir Putin, but did not clarify when such a meeting or phone call could take place.

Although Turkey is a member of NATO, it has not sanctioned Russia over the conflict in Ukraine. Erdogan – who describes his position on the conflict as “balanced” – recently paid a visit to Russia, where he and Putin agreed to strengthen their trade and energy links and step up cooperation in the fight against terrorism.

Earlier in July the two leaders also met in the Iranian capital as part of the so-called Astana Peace Process for Syria. 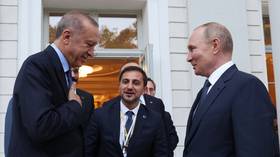 Under the terms of the July deal, representatives of Ukraine, Russia, the UN, and Turkey agreed to open a joint coordination center in Istanbul to oversee shipments of food and fertilizer from Ukraine, and to maintain safe transit routes for these shipments across the Black Sea.

Back in March, during another meeting in Istanbul, Moscow and Kiev were reportedly close to settling their differences, but the draft agreement was torpedoed by the Ukrainian side, according to the Kremlin.