Erdogan explains Putin to the West

Dealing with the Russian president is a matter of attitude, the Turkish leader said 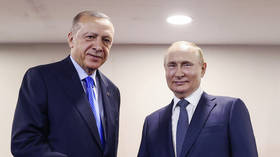 Turkish President Recep Tayyip Erdogan on Monday criticized his Western colleagues for having the wrong attitude towards Russian President Vladimir Putin, contrasting that with his own ability to work with Moscow on issues ranging from the Syrian peace process to last week’s deal to export Ukrainian grain via the Black Sea ports.

“You know the attitude of Western politicians towards Putin,” he told the state broadcaster TRT during a lengthy interview on Monday evening, calling it “unbecoming of politics.”

He credited this insight for Ankara’s ability to successfully negotiate the grain deal with both Moscow and Kiev on Friday. Turkey had also hosted the initial talks between Ukraine and Russia in the early days of the conflict, before the process broke down – reportedly at the urging of some Western leaders. 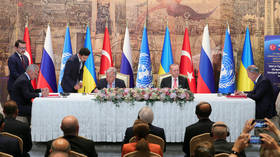 “We are determined to put this agreement into practice,” Erdogan said of the grain deal, saying it would go a long way to ease the threat of a global food crisis. He urged both Russia and Ukraine to abide by what they signed in Istanbul.

In the conflict between Russia and Ukraine, Ankara does not regard either side as an enemy, Erdogan said. Turkey has not imposed sanctions against Russia, but it has spoken in opposition to Moscow’s military operation in Ukraine and sold Kiev combat drones such as the Bayraktar TB-2.

As for relations with Russia, Erdogan said that Turkey was focusing on issues of “mutual benefit,” such as the peace process for neighboring Syria. As part of the ‘Astana Three’ initiative, the Turkish leader met with Putin and Iranian President Ebrahim Raisi in Tehran earlier this month.