Eco-activists fail to vandalize another masterpiece 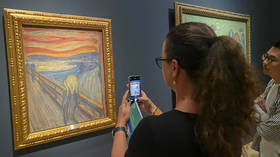 Two people unsuccessfully attempted to glue themselves to Edvard Munch’s masterpiece ‘The Scream’ in Norway’s National Museum on Friday. The painting did not sustain any damage, and the activists were swiftly apprehended by police.

Local police said they had taken “under control” three women from Denmark, Finland, and Germany. According to Norwegian news agency NTB, the third person was filming the stunt. The outlet also reported that the climate warriors chanted: “I scream when people die,” and “I scream when politicians ignore science.”

According to Norwegian police, there were glue stains left on the glass protecting the painting. All three activists are likely to be charged with misdemeanors, it added. 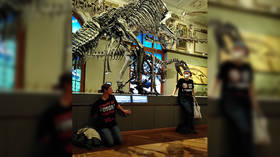 The museum said the room with the masterpiece “was emptied of the public and closed,” and it would reopen as soon as possible, with the rest of the premises still available for the public.

According to Stopp Oljeletinga’s website, the organization demands that Norway’s government declare “an immediate halt to all further oil exploration on the Norwegian continental shelf,” and lay out a “concrete plan for a fair transition for today’s oil workers.”

The stunt follows a string of similar incidents which saw climate activists across the world target famous pieces to protest against the fossil fuel industry. In recent weeks, eco-warriors vandalized Andy Warhol’s ‘Campbell’s Soup I’ at Australia’s National Gallery in Canberra, and another pair glued themselves to a dinosaur exhibit at the Museum of Natural History in Vienna.