Drug cartels, not Putin, are public enemy #1 – US congresswoman 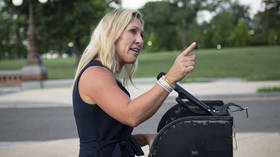 The US government should focus its military efforts on drug cartels instead of obsessing over Russian President Vladimir Putin, Republican Congresswoman Marjorie Taylor Greene has suggested on Twitter, arguing that if Washington gets its energy security in order, its national security will follow.

“Treat the cartels like you want to treat Putin,” Greene tweeted, pointing out that criminal gangs were “making billions trafficking humans and drugs killing over 300 Americans [per] day.”

The country should also prioritize its domestic oil and gas industry in order to “strengthen national security and deter foes,” she continued. 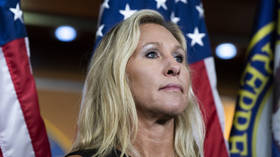 Greene was tweeting in response to former secretary of state Mike Pompeo, who had argued conservatives needed to “make the case” that “helping Ukraine defeat Putin is in our interests.” Getting that narrative worked out would “strengthen our national security, deter a foe, and lower costs for Americans,” the ex-diplomat claimed.

It was not the first time the Georgia representative has criticized the Biden administration’s generosity with regard to Kiev, which has received $54 billion this year from the US alone, more than half of that in military aid. Greene claimed ahead of Election Day that if Republicans retook the House, “not another penny will go to Ukraine,” accusing the Democratic Party of prioritizing their proxy war over the problems at the US’ southern border.

Greene won re-election by a sizable margin last week, despite being stripped of her committee assignments last year over her past support for QAnon and related “conspiracy theories” on social media. House Minority Leader Kevin McCarthy has vowed to reappoint her to committees should their party retake the House, a possibility that remains open as votes continue to be counted.

Last month, the Energy Information Administration sounded the alarm that the US had less than a month’s worth of diesel fuel left. Asked how it planned to address the problem, the Biden administration downplayed reporters’ concerns, vowing to continue exporting domestic supply to Europe, which has been hit hard by price increases after sanctioning Russian oil and gas.

Pompeo, who ran the CIA before former President Donald Trump appointed him to lead the State Department, has confirmed he is considering a presidential run in 2024, “no matter who all decides to get in” – presumably a reference to Trump, who has still not officially declared his candidacy for the coming election despite throwing shade at potential rivals like Florida Governor Ron DeSantis after this month’s midterms.