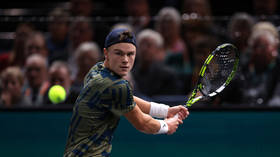 19-year-old Holger Rune scored arguably the biggest win of his career on Sunday to fight back from a set down to dethrone six-time Paris Masters champion Novak Djokovic in a scintillating performance on center court on Sunday.

Danish up-and-comer Rune earned the first ATP Masters 1000 win of what promises to be a trophy-laden career with a 3-6, 6-3, 7-5 victory over the Serbian superstar, showing a grit which belies his relative inexperience along the way.

It seemed as though Rune might be overcome by the situation after a noticeably slow start as he lost the first set to Djokovic. However, he fought back from a 0/40 score in the first game of the second set as well as a 1-3 disadvantage in the decider to etch his name on the trophy and announced himself as new contender for the sport’s biggest honors in the process.

The dramatic conclusion to the encounter saw Rune fend off six break points late on as Djokovic attempted to clinch what would have been his 39th Masters 1000 title – but each time Rune was able to dig deep and play some stunning tennis which, even if he didn’t express it on the court, would surely have impressed Djokovic, one of tennis’ greatest-ever players.

The win ensures that Rune is the youngest champion at the Paris event since Boris Becker back in 1986 in what was his fourth consecutive ATP Tour final and his 19th win in his last 21 matches.

Holger will break into the top ten rankings for the first time on Monday – and judging by Sunday’s evidence, it will take some doing to dislodge him from the upper echelon of the men’s game.

“It means everything to me, a perfect way to finish the week,” said Rune after his win. “It's a privilege to share the court with Novak.

“It was the most stressful game of my life,” he added of the decider.

“My heart was almost in my brain. I was already starting to think about the tie-break. I'm very proud I could finish it.”

Djokovic, meanwhile, was magnanimous in defeat.

“I'm not happy that you beat me, but on the other hand I'm happy for you because I like your personality, you're a very dedicated guy who loves tennis,” he said.

“You've put in a lot of hours of hard work, it's paying off for you and your future is bright.”