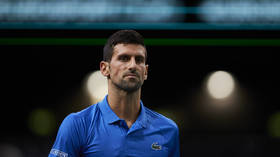 Djokovic, a six-time champion in the French capital, extended his current winning streak to an impressive 13 matches but was pushed to the limit by Tsitsipas, who overcame early adversity to storm to a second-set win – and could have taken the third but for a typically authoritative tie break win from the Serbian star.

Djokovic, who, like Tsitsipas, hadn’t dropped a set up to this point in the tournament, managed to break the Greek player’s serve twice in the opening set as Tsitsipas struggled to handle Djokovic’s serve the multiple-time Grand Slam winner showed his authority early to claim the first set in just over 30 minutes.

However, Tsitsipas found his feet in the second and took advantage of some unusually lax Djokovic service games to claim the set and move the match towards a winner-takes-all third.

But as has happened on so many occasions in the past, Djokovic shone when the pressure was on.

Both players appeared to steady their serves as the match went down to the wire in the third, which almost inevitably went to a tiebreak. Tsitsipas soon raced into a 4-3 lead before his serve ultimately faltered once more, and Djokovic powered home to claim a 7-4 win.

“It’s very sweet, obviously, when you win matches like this against one of the best players in the world,” Djokovic said afterwards.

“I thought I started the match very well, again, great hitting like yesterday in the quarters. I had chances early on in the second, I didn’t break his serve. The momentum shifted, the crowd got into it. I think he elevated his level of tennis.

“Deservedly so, we went into – both of us – into an even battle all the way until the last point, until the last shot. Some incredible points towards the end. I’m just really glad to overcome this challenge.”