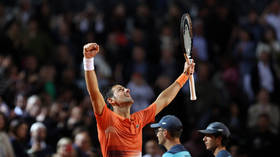 Novak Djokovic said that he was “blessed and privileged” to have recorded his 1,000th Test-level career win with his straight sets win against Norway's Casper Ruud in the Italian Open semi-final in Rome on Saturday.

Djokovic, 34, became just the fifth mens player in history to register four-digit wins and joins some of the sport's biggest names in Jimmy Connors, Roger Federer, Ivan Lendl and Rafael Nadal in achieving the landmark figure.

The Serbian star, whose first ATP win came back in 2004, was presented with a cake to celebrate the achievement with Italian Open organizers after his win against Ruud which he proudly paraded to the fans in attendance.

“I am blessed and privileged to have that many victories,” Djokovic said of the famous win.

“Seeing Roger and Rafa celebrate these milestones in the last couple years, I was looking forward to getting to that milestone myself.

“It is a long time since I won my first match on Tour. Hopefully I can keep going and there are many more victories to come.”

He also referenced the win on Twitter, telling fans: “Thank you all for being on this journey with me thus far!

“Blessed and privileged to have reached this milestone and hoping for many more victories to come.”

Djokovic reached the 1,000 mark faster than his longtime rival Federer but Spain's Nadal, who holds the lead in the all-time Grand Slam wins list, reached the milestone two matches quicker than the Serb.

Both Connors and Lendl also reached the 1,000 figure faster than Djokovic.

Djokovic, though, didn't have it all his own way in the semi-final win against Ruud, winning 6-4 6-3 after some back-and-forth action and will now play Greece's Stefanos Tsitsipas in Sunday's final as he chases what would be his first tournament win of the season.