At least 30 people in Kentucky have been killed by torrential rains, while hundreds remain missing 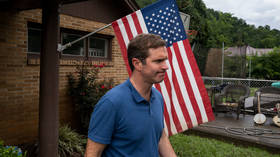 The death toll from last week’s devastating flooding in eastern Kentucky has climbed to at least 30 and, with hundreds of people still missing, the search for survivors will likely drag on for weeks, Governor Andy Beshear said on Monday.

“If things weren’t hard enough on the people of this region, they’re getting rain right now,” Beshear said at a press briefing, noting that four of the counties that were walloped by last week’s storm are under new flood warnings. “There is severe storm potential today in all of the impacted areas. That is just not right.”

Among the dead were at least six children, including four siblings – ages two to eight – who were swept away by the floodwaters as their family clung to a tree. Beshear said state officials are aware of additional victims’ remains beyond the 30 people who are confirmed to have been killed. 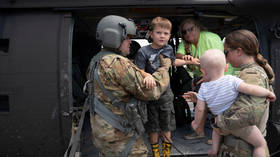 The region was inundated with eight to 10.5 inches of rain in a 24-hour period spanning parts of Wednesday and Thursday. Most Kentuckians were sleeping when the floodwaters began to engulf homes and businesses overnight. The North Fork Kentucky River reportedly rose 18 feet between midnight and 10am on Thursday, exceeding its flood stage by over 14 feet and topping its previous record level by six feet.

More than 12,000 households remained without power as of Monday morning, four days after the storm. Hundreds of people whose homes were destroyed or made uninhabitable have sought refuge in parks, churches and state-provided mobile homes, among other places. The Breathitt County Courthouse has been repurposed as a shelter.

National Guard troops from Kentucky, West Virginia and Tennessee have helped with search and recovery efforts, rescuing more than 650 stranded people by air. State crews have rescued about 750 people by boat. Dozens of roads and bridges were washed away or blocked by mudslides or debris.

The storm struck in the heart of Kentucky’s Appalachia region, which includes some of the poorest areas in the US. Beshear said many people didn’t have flood insurance because it was too expensive. Curfews have reportedly been imposed in at least two of the devastated counties because of looting.