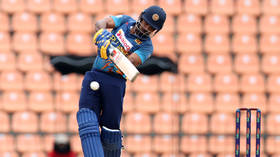 Sri Lankan international cricket star Danushka Gunathilaka is currently being held by authorities in Australia after he was arrested at his team hotel on Saturday in Sydney, where the T20 World Cup is underway. Reports indicate that the 31-year-old has been charged with four counts of sexual intercourse without consent.

The batsman, who is one of his country’s biggest stars, was subsequently denied bail during a brief hearing at a court in Sydney. He is alleged to have assaulted a 29-year-old who he met online at a residence in the area earlier in the week.

“The woman met with the man after communicating with him for a number of days via an online dating application; it’s alleged he then sexually assaulted her on the evening of Wednesday, November 2, 2022,” a statement issued by New South Wales police said.

“As part of ongoing investigations, a crime scene examination was undertaken by specialist police at an address in Rose Bay yesterday. Following further inquiries, a 31-year-old man was arrested at a hotel on Sussex Street, Sydney, shortly before 1am today [Sunday morning].”

Sri Lanka Cricket also confirmed that it was notified by the ICC that Gunathilaka had been arrested on allegations of the sexual assault of a woman in Sydney. It said the accused is due to appear in court on Monday.

“SLC will closely monitor the proceedings in court and, in consultation with the ICC, will expeditiously initiate a thorough inquiry into the matter and take stern action against the player if found guilty,” it added.

It was also confirmed that the Sri Lanka team have left Australia without Gunathilaka after their defeat by England earlier on Saturday.

Gunathilaka had been ruled out of taking part in the tournament through injury and has represented Sri Lanka in various forms of cricket since 2015.

He has drawn the ire of Sri Lankan cricket authorities on numerous occasions in the past. In 2017, he was suspended for repeatedly missing training sessions, while in 2018 he was cleared after a woman alleged he was present in a hotel room while she was raped by another man.

Last year, he was handed an extended suspension after he was found to have breached Covid-19 lockdown rules in the UK during Sri Lanka’s tour of England.