Outlays on medicine by state companies and the populace reached nearly $9 billion, according to data cited by RBC 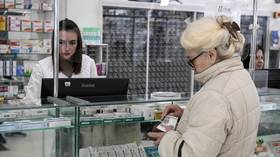 The Russian government and population spent nearly $9 billion on Covid-19 medication during the years of the pandemic, the business daily RBC reported this week, citing market research data.

Between January 2020 and September 2022, state procurement companies bought $5.3 billion worth of drugs approved by the Health Ministry, according to figures from Headway Company, an entity that monitors pharmaceutical tenders, as quoted by RBC. Among the top five most procured medicines, four were made domestically and one imported.

During the same period, pharmacies sold some $3.5 billion worth of medicines to Covid patients, including to those who chose to buy extra drugs on top of what they had been prescribed by their doctors, RBC added, citing data from the marketing agency DSM Group.

Over the past few months, the volume of Covid-19 drugs bought by the government and population has been steadily declining, RBC reported earlier this week.

A total of 21 million Covid-19 cases have been registered in Russia as of this week, and some 383,000 deaths, according to Johns Hopkins University data.