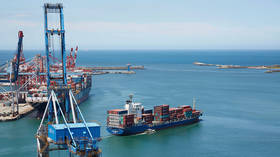 China has suspended imports of a number of Taiwanese food products, media reported on Tuesday. According to the island’s Central News Agency, these measures are interpreted as a response to a likely visit to Taipei by US House of Representatives Speaker Nancy Pelosi.

The Chinese government considers Taiwan to be a part of its sovereign territory and has warned of “serious consequences” if Pelosi’s trip to the island goes ahead.

The blacklist reportedly includes companies producing tea, dried fruit, honey, cocoa beans and vegetables. Produce from some 700 fishing vessels have also fallen under the ban. Shipments from more than 100 Taiwanese food exporters have been banned, according to Bloomberg.

Last year China banned imports of pineapples, wax apples and sugar apples from Taiwan. Most fruit produced in the territory is consumed domestically, but the bulk of exports go to China.

According to Taiwanese media cited by Bloomberg, the dispute stems from outdated information on import documentation, and the Taiwan Food and Drug Administration is currently trying to understand more about the problem.