China responds to ‘collusion’ between US and Taiwan 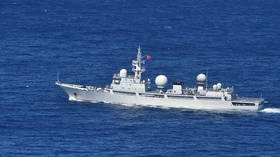 China said it deployed warplanes and warships near Taiwan as a show of force a week after US President Joe Biden vowed to defend the island.

Shi added that the maneuver was a response to “the collusion activities” between the US and the “Taiwan independence forces.” The spokesperson also argued that Washington’s support for the Taipei authorities would “put Taiwan in a dangerous situation and bring serious consequences.”

Beijing considers Taiwan, which is self-governed, part of its territory. Shi said the PLA was training to “resolutely thwart any external forces’ interference and secessionist attempts” in Taipei.

The Taiwanese Defense Ministry said on Monday that 30 Chinese warplanes flew close to the island the same day a US delegation led by Senator Tammy Duckworth arrived in Taipei. The Chinese state-run newspaper, Global Times, meanwhile, reported that the aircraft trained “the seizure of air superiority and aerial strikes in a simulation of reunification-by-force.” 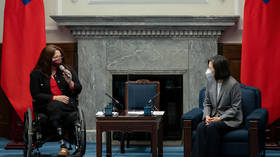 Taiwanese President Tsai Ing-wen said Taipei was seeking closer cooperation with Washington on security matters. She added that the Pentagon was “proactively” planning a partnership between the US National Guard and Taiwan’s defense forces.

The US and China have been accusing each other of stirring up military tensions around Taiwan and in the larger South China Sea region. President Joe Biden promised last week that his country would defend Taiwan if Beijing attacked the island.

Taiwan has been controlled by its own government after Communist forces won the lengthy civil war and took over mainland China in 1949. Most countries, including the US, follow the ‘one-China policy’, refraining from establishing formal diplomatic ties with Taipei. Washington, however, has a long history of providing Taiwan with military aid, and US politicians have visited the island and met with Taiwanese officials.