Home Iz minuta u minut China mocks US over Afghanistan 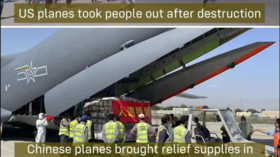 The same kind of planes the US used for its chaotic withdrawal from war-torn Afghanistan, China is now deploying to deliver supplies for rebuilding the country’s province stricken by a major earthquake, a spokesman of the foreign ministry in Beijing pointed out on Twitter on Friday.

“Similar transport planes, different missions in Afghanistan,” Zhao Lijian tweeted. He accompanied that with a screenshot captioned in English: “US planes took people out after destruction, Chinese planes brought relief supplies in for reconstruction.”

One of the images is the iconic photo of the US C-17 Globemaster III attempting to take off from Kabul in August 2021, surrounded by desperate Afghans trying to cling on. On the bottom is a photo of the Chinese Xian Y-20 transport, delivering pallets of aid last week.

Zhao’s still appears similar to a video circulating in China and contrasting the relief effort with the US scramble to leave Afghanistan in August 2021, as the Taliban took power in Kabul and the US-backed government melted away.

Two of Afghanistan’s provinces on the border with Pakistan, Khost and Paktika, were struck by a 6.1 magnitude earthquake on June 22. Initial reports put the death toll at 700, with twice that many injured.

China has responded to the Afghanistan quake by announcing 50 million yuan ($7.5 million) worth of aid. The videos and photos show the People’s Liberation Army Air Force airlifting some of the aid into the Kabul airport.

The US Agency for International Development (USAID) said it had sent $55 million worth of aid, including emergency supplies, to Afghanistan quake victims. The aid had to be routed through partner organizations such as the IOM, as Washington does not recognize the Taliban government, however.

Friday’s needling by Zhao is not the first time the Chinese foreign ministry’s spokesman has mocked the US over Afghanistan. In September last year, about a week after the last US troops left the country, he posted a video of the Taliban playing around in the wreckage of an American-made plane, captioned “graveyard of empires.”