With President Xi ordering his military to increase strength, the appearance of the missile is being seen as a warning to the US 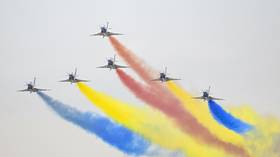 China revealed its latest anti-ship hypersonic missile, a version of the YJ-21, to the public for the first time at an air show on Tuesday, the South China Morning Post reported. Amid increased tension with the US over Taiwan, the revelation of the missile is being seen as a message to Washington.

Two missiles bearing the designation ‘2PZD-21’ were seen under the wings of a Xian H-6K strategic bomber at the opening of Airshow China in the coastal city of Zhuhai, the Hong-Kong-based newspaper reported. The YJ-21 was previously seen on video being test-fired from a People’s Liberation Army Navy destroyer in April, as the USS Abraham Lincoln took part in joint drills with Japan near the Korean peninsula.

Other media reports have suggested that the missiles, spotted several days earlier, are in fact variants of the CM-401, previously known as truck- or ship-launched hypersonic missiles with a shorter range of 300 kilometers.

With the air show taking place after China and Taiwan held competing military exercises following the visit of US House Speaker Nancy Pelosi to Taipei in August, showcasing the missile is an attempt at “warning the US not to intervene in Beijing’s plan to take Taiwan back by force, as none of the US sea-based air defense systems are able to intercept the hypersonic missile,” defense analyst Andrei Chang told the paper. 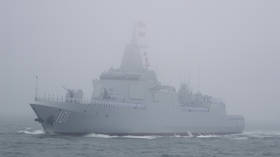 Beijing has publicly stated that it intends to reintegrate Taiwan with the Chinese mainland by peaceful means. In a white paper published in August, the Chinese government affirmed this commitment to peaceful means, but reserved “the option of taking all necessary measures."

Similar in shape to Russia’s nuclear-capable Kh-47 Kinzhal hypersonic missile, the YJ-21 is thought to have a range of more than 2,000 kilometers. Moscow has deployed the Mach 12 Kinzhal against static targets in Ukraine but has not fired it against warships, which it is designed to sink in a single strike.

As Airshow China began, Chinese President Xi Jinping called on Tuesday for the People’s Liberation Army to be ready to “resolutely defend national sovereignty, security, and development interests.” With the world undergoing changes “unseen in a century,” Xi said that the entire military “must implement the [Communist] Party’s idea of strengthening the army in the new era.”